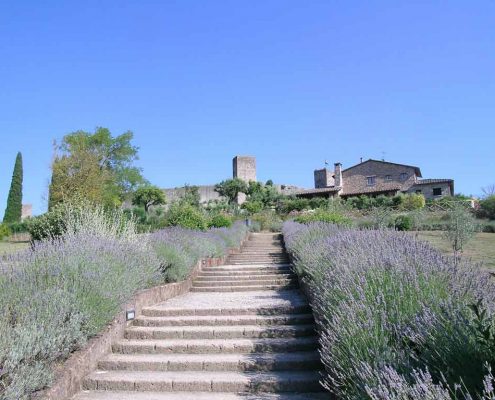 The Monteriggioni castle, at the top of a hill planted with vineyards and olive trees, was founded in the second decade of the thirteenth century  by the Republic of Siena, with the aim to create a defensive outpost against Florence, its rival.
The town walls made of stone have a linear development of about 570 meters.
The grandeur of the Towers, fourteen with a rectangular layout and one set against the inner curtain, suggested to the poet Dante Alighieri a popular similarity with the Giants placed in Inferno:
“[…] As with circling round / Of turrets, Monteriggioni crowns his walls; /E’en thus the shore, encompassing the abyss, / Was turreted with giants, half their length / Uprearing, horrible, whom Jove from heaven / Yet threatens, when his muttering thunder rolls. […]” (Inf., XXXI, lines 40-44).

The gate directed towards Rome is the main access to the village. 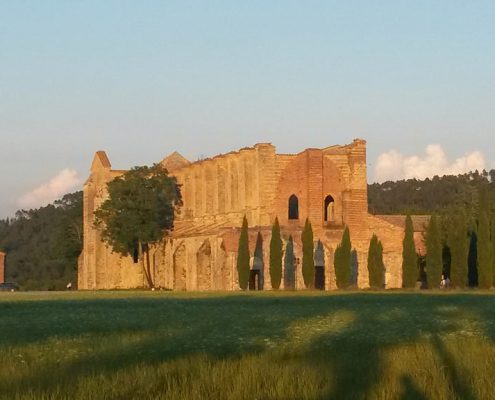 The complex is made up of Eremo or the circle of Montesiepi and the ruins of the great Cistercian Abbey of San Galgano.

In the ‘Rotonda’ of Montesiepi, built between 1182 and 1185, visitors can see, stuck in the stone, the sword of Saint Galgano. 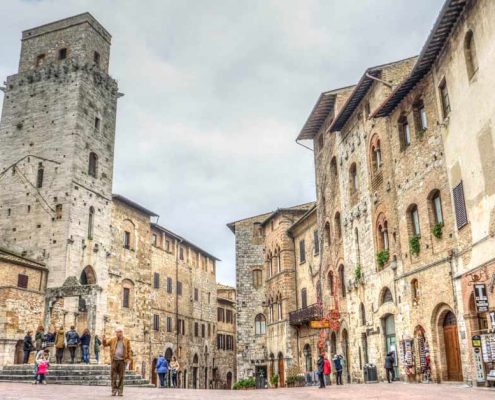 The legend tells that in 63 BC two patrician brothers, Muzio and Silvio, fled Rome – after their implication in the conspiracy of Catiline –  for Valdelsa and built two castles, Mucchio and Silvia (now San Gimignano).

The little city of San Gimignano is on the ridge of a hill, 334 metres high, with its thirteen towers. The highest is Torre Grossa, reachable through the Communal Palace lying in Piazza Duomo and enclosing the Dante’s Hall (decorated with important courteous and chivalrous fresco cycles) and the museum (with works of the period between the thirteenth and seventeenth century).
The complex of the former Santa Chiara Conservatory houses the Archaeological Museum, the Pharmacy of the Hospital of Santa Fina, the Galleria d’Arte Moderna e Contemporanea ‘Raffaele De Grada’. 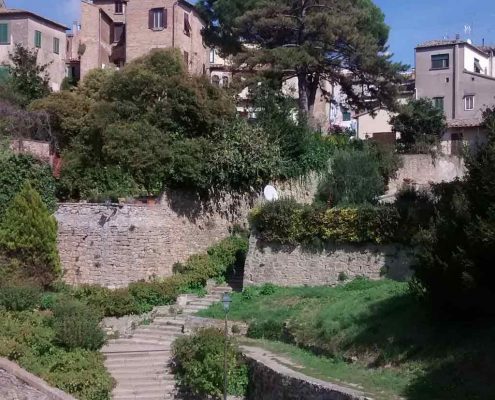 Walking through the streets of the historic centre of Volterra, but also visiting the city museums (the Etruscan Museum, the Civic Art Gallery, the Museum of Sacred Art, the Ecomuseum of Alabaster) you can admire the testimonies ranging from the Etruscan period to ‘eight hundred. All this combined with the stunning landscape and an artistic craftsmanship of excellence: alabaster. 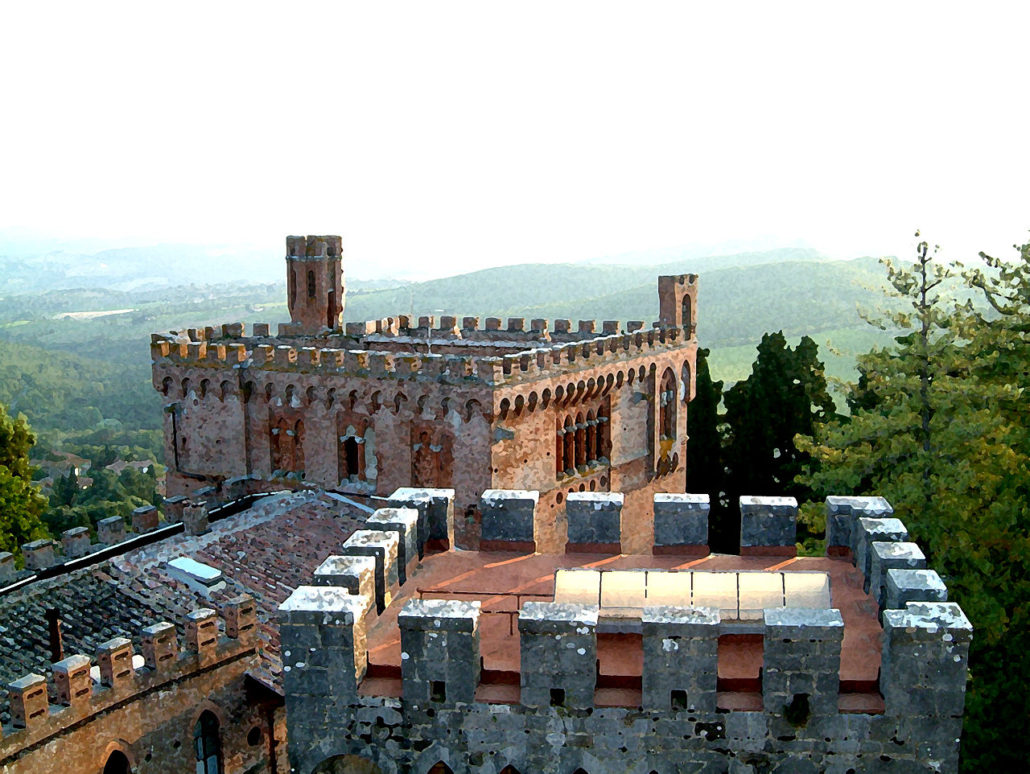 The charming Castle of Brolio dominates for over 10 centuries the valleys that surround it in the southern part of the Chianti Classico. Located on a tall and lonely hill just a few kilometers from the center of Gaiole in Chianti.

The castle we see today is the result of the reconstruction of Bettino Ricasoli in the nineteenth century, according to the medieval taste of the time. Beautiful and charming Italian gardens and romantic park surrounding the castle. From the garden you can enjoy breathtaking views of Ricasoli’s famous wine producers. On the horizon, in the serene days, you can see the splendid Siena. 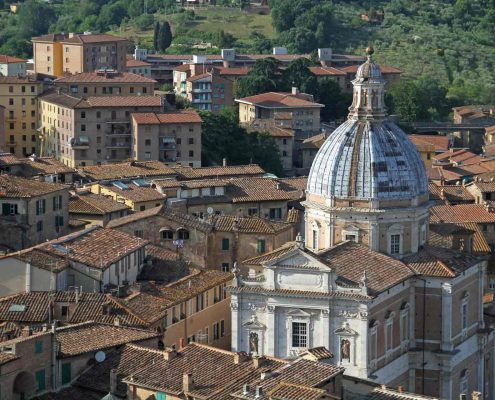 The “Gothic dream” Siena, medieval cityscape, has been declared by UNESCO a World Heritage Site since 1995.

Moreover, UNESCO has chosen the figure of the woman in white in the Ambrogio Lorenzetti’s Effects of Good Government (lying in the Civic Museum of Siena), as the universal symbol of peace.

The Via Francigena has had, throughout the Middle Ages, of fundamental importance for Siena, since it developed around the old Hospital of Santa Maria della Scala (which is now a major museum complex), just face to the Duomo, which was a milestone for all those who travelled along this road.

Giorgio Vasari describes the floor of the Duomo “the most beautiful …, grand and magnificent … that was ever done”, with its 56 marble panels inlaid and graffiti painted between 1369 and 1547 and designed by artists such as Matteo di Giovanni and Domenico Beccafumi and Pinturicchio.

Nicola Pisano created the grand pulpit, his son Giovanni Pisano the facade sculptures, Donatello a statue of the Baptist and the tombstone of Giovanni Pecci.

Gian Lorenzo Bernini sculpted Mary Magdalene and St. Jerome in the Chapel of the Vow, where the Madonna del Voto attributed to Dietisalvi di Speme, to whom the people of Siena are traditionally very devoted.

And how not to mention the Piccolomini Library, a highly significant monument for the frescoes by Pinturicchio.

Sansedoni Palace, (Sienese family who commissioned its construction in the mid-thirteenth century) now houses the Fondazione Monte dei Paschi di Siena and within it stands the baroque chapel dedicated to Blessed Ambrogio Sansedoni.

Maps were disabled by the visitor on this site. Click to open the map in a new window.
Contact us
Book now